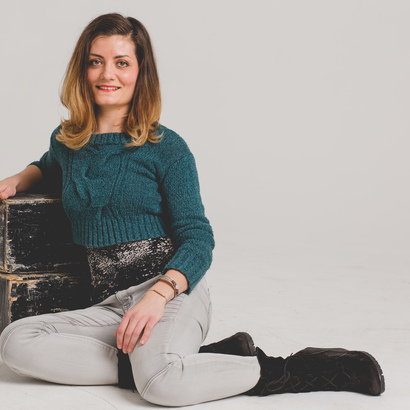 Carolyn Beehler is a California native who grew up in Franklin, Tennessee, though she never acquired a southern drawl. At Oak View Elementary she enjoyed playing basketball, writing in cursive and learning about the rainforest in Science. On summer days she would rise at 6 am to grab a cinnamon pop tart, sometimes accompanied by a packet of Equal when the inspiration struck, to watch The Beverly Hillbillies and I Love Lucy on channel 58.

She spent her middle and high school years at Franklin Classical. Although Latin proved failed to delight her mind, she awakened to studies of art and history, and discovered through yearly 40-hour-projects the wonder of stained glass, painting and cooking. She wonders if some of her friends were made because of the infamous chocolate parties she threw outside of class.

After high school she went to O'More College of Design where she studied graphic design and traveled most summers, including a backpacking trip through the UK with two friends. Upon graduating at the end of 2009, she flew to Shanghai to spend a semester working as a design intern at a contemporary art gallery at 50 Moganshan Road. From there the wanderlust took over, and she spent the next few years yielding to curiosity of new experiences over building a career, which took her to Los Angeles, Bloomington, and Italy. Amongst a smattering of jobs she enjoyed working at a B&B, a grocery co-op and several farms.

Carolyn has settled in Tennessee again, not because she has satiated her appetite for adventure, but because she believes in creating collections of art that express and validate our collective desire to see the world. Enlightened by the lives of people across the world, her artworks testify that travel is more than escapism, that we should absorb new places and artifacts until they are fully integrated into our being. She appreciates the way art and travel promotes improved, longstanding relationships with people and cultures. Collage became the most fascinating medium to express these convictions, given the array of textures, words and numbers that create layers of story and symbolism. Her impressionistic style hints at the works of Vincent van Gogh and Salvador Dali, two artists who pioneered expressions of movement as well as a dreamlike fusion of unrelated images.


Other works by Carolyn Beehler