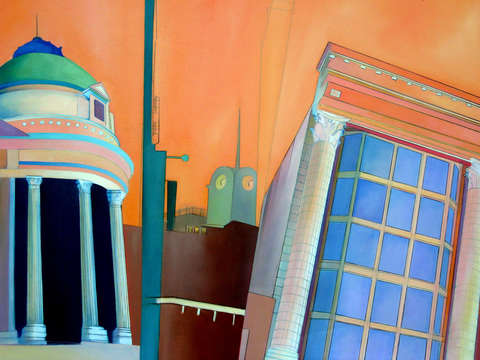 While walking west of Sixth and Market Street, one can notice a magnificent decayed and iconic city landmark, Furniture and Carpets, and if you are looking upwards it is recognizable due to its large signage atop. It is a gorgeous tall glass facade with its enormous Corinthian columns, holding itself all on its own. Furniture and Carpets is also known as "Eastern Outfitters Company building", and was designed and built by the architect George Applegarth in 1907. After the "Eastern Outfitters Company" went out of business, it became a sweatshop and was abandoned for many years. In recent years, the building has gone through renovation and this building is beautiful and has come to life again!

In Hibernia meets Furniture and Carpets, I painted 3 individual San Francisco buildings part of Central Market district and this time they are merging as one whole street. On the right, originally located at 1021 Market Street, is the infamous and forgotten Furniture and Carpets. On the far left, is The Hibernia Bank, a deserted city landmark located at Jones and Market, designed by the beaux-arts tradition by Albert Pissis in 1892. It was considered the most beautiful building in San Francisco. Both the Hibernia and Furniture and Carpets are united by the clock tower of 33 New Montgomery Street. This clock building illuminates the streets and can be seen from a far and forms part of the city’s landscape.