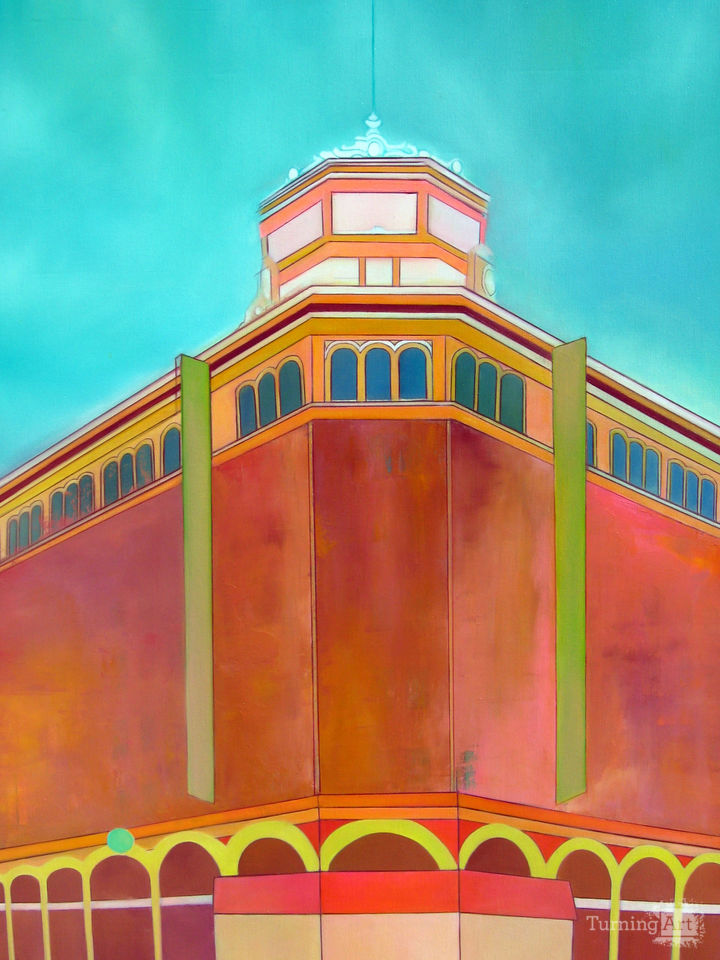 San Francisco’s Golden Gate Theatre, exudes the essence of a sacred monument. It is situated at 1 Taylor Street, intersected at an angle between Market Street and Golden Gate Avenue. The Golden Gate Theatre was built by G. Albert Lansburgh in the 1920’s. The theatre showed silent films for over 50 years. During the 1960’s, it was converted into a two-screen theatre. It suffered little damage, restored as a single auditorium and reopened in 1979 as a Performing Arts Center and continuous to host performances. Yet the exterior façade needs an uplift and would be ideal to showcase its neon lights as this grand structure has a marvelous Art Deco sign. This time the "Golden Gate Theatre", is surrounded by a bright mint green sky.

Other works by Patricia Araujo

Patricia Araujo was born in Miami, Fl, the daughter of Colombian parents, and she grew up in Bogota, Colombia. Since childhood, she's been enchanted by architecture and form – drawing arches and entrances, and designing imaginary floor plans. After completing high school in Bogota, Araujo moved to Northern California to pursue her college education. She studied architecture, painting, and photography. In 2005 she obtained her second B.F.A in Painting, from the San Francisco Art Institute.

Since the late 1990's, Patricia Araujo has painted the facades of both iconic city landmarks and downtown buildings. Her paintings depict praiseworthy examples of San Francisco architecture, some utilitarian and others grandly ornamental. She's been bewildered by the architecture of cities she's lived and traveled to and by imaginary places. From 2008 to 2010, she dedicated a series of works relating to Tomorrowland and as of most recent she's devoted to painting the architectural wonders and forgotten treasures of "GGIE" (the Golden Gate International Exposition of 1939 at Treasure Island) – the last World's Fair of San Francisco Bay. Her interest in researching the urban landscape continues to grow, addressing the evolution and decay within a city. Araujo continues to deepen her conceptual themes on architecture, place and change in the urban landscape.

She has been exhibiting in San Francisco since 1998. Some of the venues exhibited include: Arc Gallery, Arttitud, Bayview Opera House, HANG ART, Roll Up Gallery, STUDIO Gallery, the Old Emporium, Pen Club Gallery in Budapest and most recent at the Old Mint with Treasure Island Museum. In 2008, she published her first book, entitled ”SOMA SEEN”. Her work has been written about in the San Francisco Chronicle, ARTslant, 7×7 SF, Huffington Post, Examiner, Beyondchron, and the San Francisco Bay Guardian. She lives and works in the San Francisco Bay Area. To view her complete portfolio and resume online please visit: www.AbstractMetropolis.com