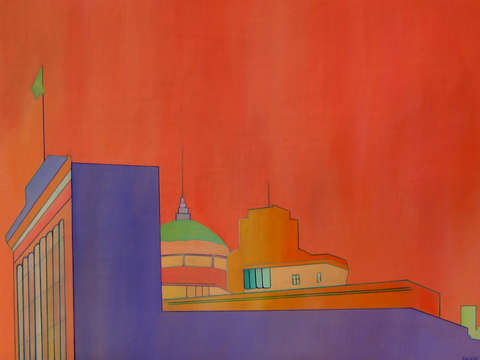 "A New Day: 6th and Market", presents the building facades of the Golden Gate Theatre and the Warfield Theatre in a continuous silhouette. The large building facade on the left is the infamous Warfield Theatre. Although these buildings are centrally located near downtown and the booming heart of the city, Sixth Street is one of the most decayed neighborhoods in San Francisco.

The Golden Gate Theatre was designed by the architect G. Albert Lansburgh in the 1920's. He said, “form and function must compliment one another…a theatre must not only be beautiful but completely functional”. The theatre showed silent films for over 50 years. During the 1960’s, it was converted into a two-screen theatre. It suffered little damage, restored as a single auditorium and reopened in 1979 as a Performing Arts Center. The Warfiled Theatre was also designed by G. Albert Lansburgh. A 2,300 seat music venue- a vaudeville theatre when it first opened in 1922. The Warfield served as home for the Greatful Dead for many years, and also many other great bands have performed and continue to play there.

In this painting, I share the second phase for "A New Day: 6th and Market"- the sky is wide and open, could be a bright sunrise or sunset. It is a quiet setting, and no pedestrians are nearby. All 3 buildings' facades are holding themselves up and standing harmoniously. A new day awaits for everyone to be part of and share the uplift of the scene.

In a recent article in Artslant, written by Wilma Parker, she describes this painting as followed:"Patricia’s lipstick-glossy "A New Day, 6th and Market", shows the same Golden Gate Theater, but now transformed into pure geometry and solid space, the tonality taking you off the mean grey fog-bound streets abandoned even by sailors into the cleanest of deep blue tangerine atmospheres reminiscent of a day at the Taj Mahal. Perhaps that is where all our sailors went."