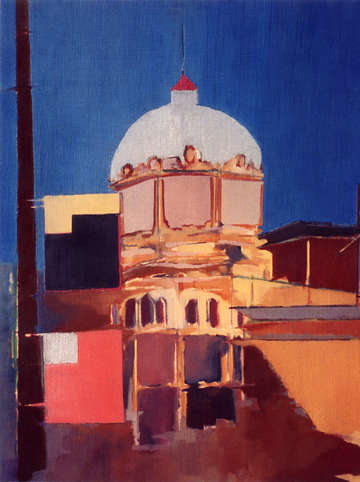 San Francisco’s Golden Gate Theatre exudes the essence of a sacred monument. It is situated at 1 Taylor Street, intersected at an angle between Market Street and Golden Gate Avenue. Crossing Sixth Street, one of the busiest and most squalid streets in San Francisco, the Golden Gate Theatre stands independently: an elegant icon. Its grand structure has a marvelous Art Deco sign. The most attractive feature of this theatre to me is its dome. It is a beautiful and voluptuous metallic silver dome. Although recently, this dome has been re-painted and is now white-cream tone. Not sure if it will go back to its original color. Hope so!

“Form and function must compliment one another…a theatre must not only be beautiful but completely functional”, said the architect G. Albert Lansburgh. The Golden Gate Theatre opened in 1922 as a vaudeville venue, and later was a major movie theater. In the 1960s it boasted a Cinerama screen, but by the early 1970s had declined. It was restored and reopened as a performing arts venue in the late 1970s.

The Golden Gate, as well as the Orpheum theatre in San Francisco are owned by SHN (Theatres), a theatrical producing company owned by Carole Shorenstein Hays and Robert Nederlander. The Golden Gate Theatre has presented many Broadway shows such as A Chorus Line, Sweeney Todd, Stomp, Hairspray, Mamma Mia!, Chicago, Rent.

There is a sense of nostalgia, one imagines what it was like to walk here 60 years ago, in better times, to feel the life of its people and the atmosphere. Perhaps, when the Golden Gate Theatre was new, glowing in the new neon lights, advertising upcoming films, accompanied by the nightlife, and the glamour of its audience, it was truly amazing, yet today it continues hosting excellent performances. This theatre must be seen from a far, as from Sixth Street before crossing Market Street.

Departure derives from an observation coming from Golden Gate Avenue. The theatre seems to ascend. This painting can relate to a classical approach in its selection of such a structure, and its centered composition. It may be pictured as in full light or twilight. Included on the left are square patches of street signage, inviting the pedestrian to stare. The theatre is about to go, yet it wants to stay.