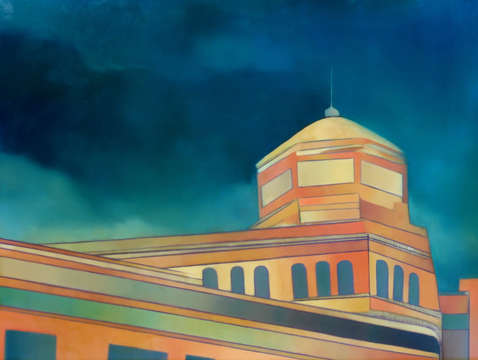 This painting presents the top side view of San Francisco's Golden Gate Theatre. The Golden Gate Theatre exudes the essence of a sacred monument. It is situated at 1 Taylor Street, intersected at an angle between Market Street and Golden Gate Avenue. It was built by G. Albert Lansburgh in the 1920’s. The theatre showed silent films for over 50 years. During the 1960’s, it was converted into a two-screen theatre. It suffered little damage, restored as a single auditorium and reopened in 1979 as a Performing Arts Center and continues to host performances. Yet the exterior façade needs an uplift and would be ideal to showcase its neon lights as this grand structure has a marvelous Art Deco sign.

This piece was first exhibited during Araujo's solo show, ON THE EDGE OF DELICATE LINES in 2013 at Alphaville Gallery in San Francisco. This painting was last exhibited at the Old Mint, for Mid-Market Landmarks solo exhibition in San Francisco in 2013.