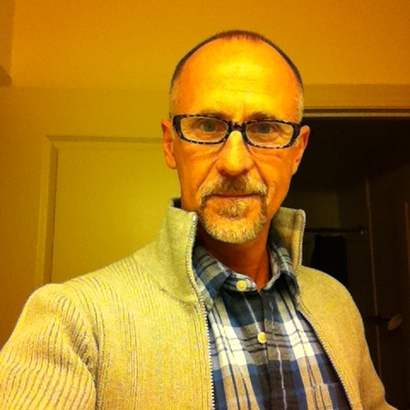 Tim grew up in the Central Valley of California. His many trips to Yosemite National Park with family and friends infused his soul with a visual and visceral template of rolling foothills, gnarly live oaks, and the wonder of the Mist Trail, El Capitan, Half Dome, giant sequoia trees, and Yosemite Falls. He felt at home in nature’s grandeur.

He went off to college and majored in Religion and Sociology. He took a drawing class and the professor wanted him to become an art major. No, he was going into the ministry. He graduated from Princeton Theological Seminary and took his first call as a youth pastor at a 2,100-member church in the San Francisco Bay Area. A pastor for life.

But by his third year in ministry, he knew his creative itch could no longer be ignored. His girl-friend bought him a small water-color set. At a flea market in Sonoma he bought a big box of used acrylic tubes of paint for cheap. The café owner allowed him to hang his first show in her little place. A friend told him, “One of your paintings is gone!” Tim asked incredulously, “Somebody stole it??” “No, they bought it!” Two shows later he sold three 36×48 inch paintings for $2,000 each. He joined a working studio and gallery in Berkeley, CA, and began selling regularly with a loyal following.

His first church commissioned him to do a seven painting installation for Lent; a new painting replaced the previous painting every Sunday. On Easter morning, he sat in the back, and watched the reactions of people as they came into the sanctuary, and saw all seven paintings, each one transformed, and now hanging together from the vaulted ceiling for the first time. Tears of joy, in their eyes, and his. Tim knew, creativity and spirituality, went hand-in-hand.

Tim is self-taught. Experimentation and errors have been his faithful teachers. He’s learned to trust them. Initially inspired by the Impressionists, Tim’s landscapes took on their own character, and developed into a new style – “Abscapes” – landscapes with abstract elements, often putting civilization and nature cheek-to-jowel, for this relationship, if done well, will keep us alive. For this style of painting he won First Place at the 2016 Sedona Arts Festival.

Tim, initially, did not like abstracts – they were too easy. Just throw paint on a canvas! His first abstract was a hot mess, and he suddenly knew abstraction was a complex, foreign language, with a completely different alphabet. He wanted to learn it, and he has. Tim now calls his abstracts “Inscapes”. He sees them as metaphors for the soul, for the coming apart and falling together of our lives, all happening simultaneously.

Tim also does figurative paintings. He loves to capture uncomfortable moments and the comfortable ones in odd, unique ways. How many paintings exist of The Annunciation? In Tim’s version, Mary’s hair is short, black, like her dress, like the background, and a shadow falls upon Mary’s arm, to which she is both drawn and repelled, reflecting the words found in the Gospel of Luke spoken by the angel, “and the power of the Most High will overshadow you.” The painting won best of show in the 2012 Spirituality Show at CORE New Art Space in Denver, CO.

In 2018 Tim was awarded the honor of painting six out of fourteen murals at a new high-rise medical building in Denver’s River North Art District. When he found out the murals were to be painted on the walls seen as you pushed open the door to the lavatories, Tim lovingly called it “The Sh*t Show!” Art is appropriate everywhere.

Tim paints in his River North studio, serves part-time at Central Presbyterian Church in Denver, performs as a Singer-Songwriter locally and nationally, and has written a book. Tim’s creativity and spirituality go hand-in-hand, coming apart and falling together simultaneously.


Other works by Tim Mooney