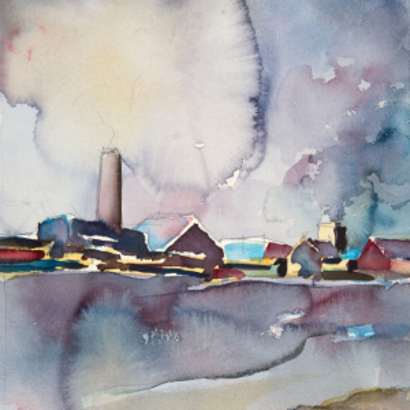 Luca Ricco, born in Italy in 1962, was trained as a painter and an architect. In 1994 he moved to the States where he worked as an architect and painted in his free time. In 2003 Luca was diagnosed with a Meningioma brain tumor and had to undergo surgery to remove it. The operation left him completely paralyzed and unable to speak. After a month of rehabilitation Luca was able to regain the ability to walk with the assistance of a cane and was able to re-learn some of his native Italian with the help of a teacher.

While spending time at the rehab facility Luca started to draw as a recreational activity. Although he had been trained as an artist the effects of the surgery left him unable to resume his previous practices. Over the course of the month he also began painting with watercolors. However, since his right side had been paralyzed, he had to completely re-learn how to draw and paint with his left hand. During his difficult rehabilitation Luca had a hard time communicating with other people. He used drawing and watercolors as a way to express himself.

Luca created all the work you see on TurningArt left-handed.