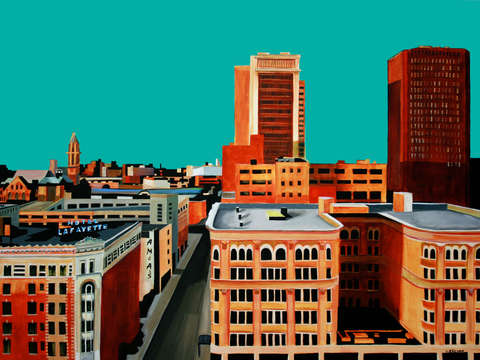 Buffalo's architecture is diverse in style, with a collection of buildings the 19th and 20th centuries. Most structures and works are still standing, such as the country's largest intact parks system designed by Frederick Law Olmsted and Calvert Vaux. At the end of the 19th century, the Guaranty Building—constructed by Louis Sullivan—was a prominent example of an early high-rise skyscraper. The 20th century saw works such as the Art Deco-style Buffalo City Hall and Buffalo Central Terminal, Electric Tower, the Richardson Olmsted Complex, and the Rand Building. In this painting you can see the Am&A's building on the left – Adam, Meldrum & Anderson Company (AM&A's) was a chain of department stores based in Buffalo, New York. It was an institution to generations of shoppers in the Buffalo area and remained family owned until its sale to The Bon-Ton in 1995. Also on the left side of the piece you can see the Hotel Lafayette. It is a seven story steel frame and concrete building designed in the French Renaissance style. The original building was designed by the firm of Bethune, Bethune & Fuchs, including noted architect Louise Blanchard Bethune (1856–1913), and built between 1902 and 1911. In its prime, the Lafayette Hotel was considered one of the 15 finest hotels in the country. Besides elevators, every room featured hot and cold water and a telephone. It was listed on the National Register of Historic Places in 2010.