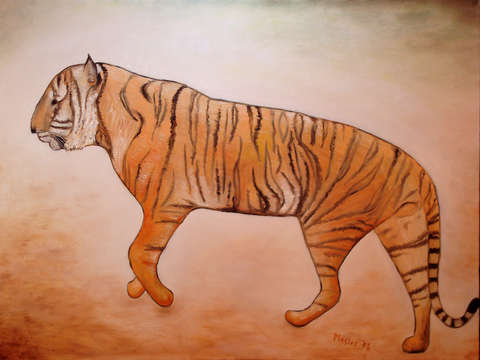 The subject for the "Mystic Tiger" is an Indian tiger named Axle at the Greensboro Natural Science Center. Almost floating in space, the tiger's side view is captured in mid-stride with only a hint of shadow in the foreground. The background was rendered to simulate the almost disembodied effect the animals inspire with their graceful movements when they stalk their territory. The emphasis on the form of the tiger and its stripes highlights the power and beauty of the animal. The tone of the tiger was a challenge to render naturally, with mainly earth colors instead of metallic, artificial pigments.

This Siberian tiger (Panthera tigris altaica) is a critically endangered species of tiger. Only approximately 500 of these tigers exist in the wild, mainly in the Russia Far East and neighboring China. These tigers, also known as Amur Tigers, are the largest of the six tiger subspecies and they are born to hunt their prey. Deforestation has taken away their natural habitats and the prey available to them, but poaching and illegal hunting has also been largely responsible for their demise. Axl, pictured here, and his mate Kisa, were actually bought by someone as pets, and they were donated to the Natural Science Center in Greensboro, North Carolina.