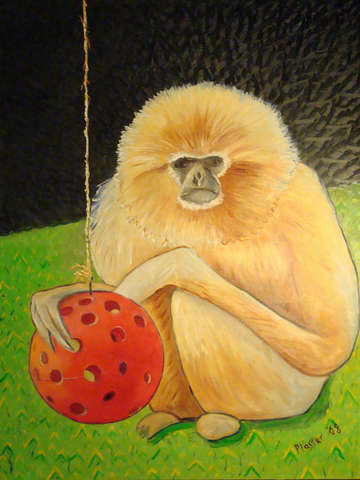 One of the latest in the artist's series of "whimsical" animals, this gibbon monkey was a resident of the Natural Science Center of Greensboro, NC. The juxtaposition of the red, plastic ball with the wild monkey (in captivity) is a stark contrast. The background of zig-zags sets the monkey apart from its surroundings in an unearthly quality. This monkey and its mate died tragically in July 2008 when they were undergoing their annual physical examinations.

Because of rapid human-caused deforestation, gibbons are an endangered species (this one is the more common white-handed gibbon, of which there are only 79,000 in the world). This particular animal and its mate were a part of a breeding program, and their death is unfortunate. They will be missed!