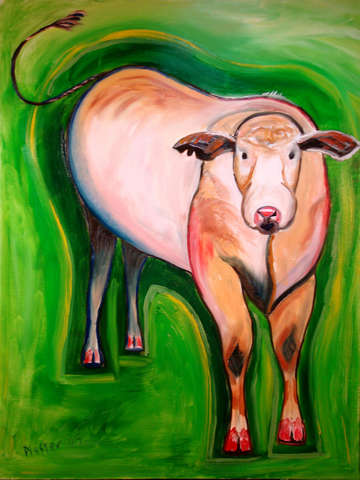 The "Cosmic Cow" is the first in the artist's series of "whimsical" animals, and the namesake of The Cosmic Cow Society, a group formed to promote the arts in the NC Triad community. It has been featured in magazines, newspapers, and even on TV. One of its most striking features is the subject's dominance of the canvas, while still achieving a dynamic composition with the subject looking straight at the viewer. Without an overriding sense of light and shadow, the cow is presented in pink, magenta, and earth tones and surrounded by a sea of complementary greens. Its body is given a defined outline and an "aura" surrounds the cow, lending its unearthly name.