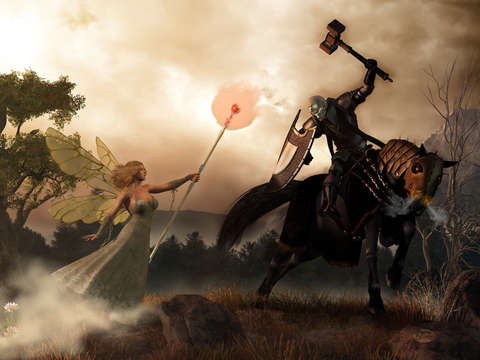 Lord of Winter, Queen of Spring

A dark undead knight on a spectral mount faces off against a bright fairy queen. The deathknight known as The Lord of Winter raises his cold hammer to strike, but the faerie Queen of Spring counters with a fiery burst of magic from her staff. Meanwhile, the elements themselves around them seem to be in conflict.

Here in Atlanta, the change from winter to spring can be kind of strange. Sometimes the winter can hold on until the end of April, but often spring wins out in early March. It can vary quite a bit day to day here. For instance, yesterday it was 80 degrees Fahrenheit (~27 Celsius) when I did my daily jog at noon. Just a week ago, it was 40 (~4 Celsius). The week before that, 75. It's always as if winter and spring fight with one another this time of year. So I decided to create a work that visualized that struggle.