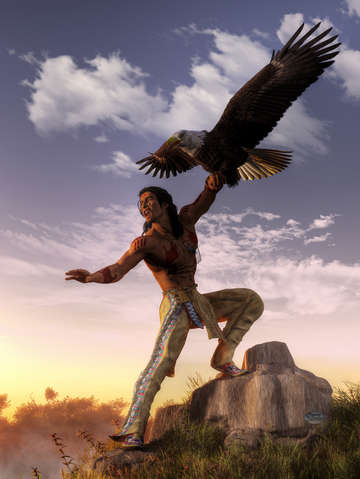 Standing on a rocky hilltop, an American Indian warrior shouts as he unleashes his companion, a massive bald eagle. The warrior is shirtless but wears tan hide leggings and moccasins intricately detailed with red, white and blue bead work. He has also decorated his skin with red and brown war paint. The great eagle is perched on the man's arm, but it spreads its wings, ready to take flight. Behind them wispy clouds cut across the dawn skies.

I often draw inspiration for my artwork from Native American legends and stories. I had been wanting to create a Native American themed work that incorporated and Eagle for a few weeks. While doing research, I came across the Delaware story of "The Warrior and the Eagle" in which a warrior must help raise Eagles as punishment for trying to pluck their feathers. The story gave me the idea to create a scene that sort of follows up on the legend where the warrior now has one of the eagles he helped to raise as a companion.

To make this, I used digital 3d and digital painting techniques.