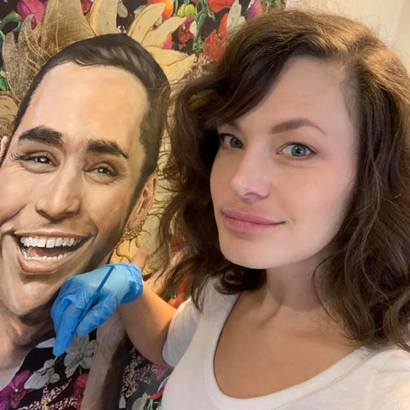 Sarah Jacobs is a contemporary artist. Her work has been exhibited in the US and in Europe and she has taken part in artist residencies in Grimma, Germany, Cali, Colombia, and Taos, New Mexico. She has won multiple grants, including the Arts Council England Grant, and her work can be found in public and private collections in the US, UK, and Hong Kong. She has had solo and two person exhibitions in New York City, London, Wrocław, Poland and Bristol, England, among other cities.

Born in 1984, Jacobs was raised in Littlestown, Pennsylvania. She was educated in Art History at Gettysburg College and received her MFA from the Hoffberger School of Painting at the Maryland Institute College of Art in Baltimore in 2010. There she studied under Joyce Kozloff and Timothy App. Jacobs moved back to the USA in 2014 after 3 years living in London and Bristol, UK where she became a naturalized British citizen.


Other works by Sarah Jacobs