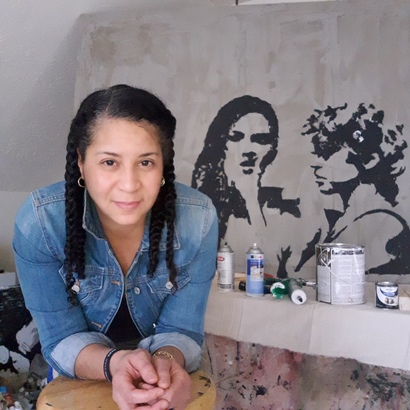 Award-winning mixed media artist, Rebecca Robinson studied fashion design in Atlanta, Ga., and continued her education at North Carolina Central University where she majored in Art/ Visual Communications and graduated with high honors. Her background also includes art history, photography, graphic design, film, and creative marketing/branding. Rebecca was mostly known for her fashion design company PSNOB (pronounced snob) which launched in 2001 but in recent years, has taken a new direction with her craft. In the spring of 2019, Rebecca began the initial stages of forming her nonprofit organization called “ONE ARRT ”, which will become the first black-owned art supply brand that specifically supports all artists, art organizations, art education, museums/galleries, and communities in need who would prosper with proper funding and resources. Rebecca has also contributed to several nonprofit organizations throughout the country by auctioning her one-of-a-kind handbags and fine art.
Learn more about psnob

Rebecca's artwork has been featured in several art exhibitions and media outlets including; Indianapolis Business Journal Podcast, WFYI, NUVO, Jezebel Magazine Atlanta, Pattern Magazine, Indianapolis Star, Indianapolis Recorder, New York Examiner, WTHR 13, WISH-TV 8. RTV 6, FOX 59, Creative Mornings Indianapolis, Indianapolis Monthly Magazine, The National Endowment Of The Arts including the Black Creativity Exhibit at the Chicago Museum of Science and History of her painting of jazz legend Miles Davis In the summer of 2019, Rebecca was selected by the Arts Council of Indianapolis to showcase her work for the annual High Art Billboard project (2019-2020). Rebecca is also a self-published author of the book "Arts Honor". In 2018, Rebecca co-produced the award-winning documentary film "The Color of Medicine": The Story of Homer G. Phillips as a tribute to her father and grandfather. In honor of the historic documentary film, Rebecca received an official scroll from Supervisor Mark Ridley-Thomas from the county of Los Angeles for her contribution to preserving an important part of history and giving back to the community of St. Louis and beyond. Rebecca is a member of "WE ARE INDY ARTS" established in 2015 and in the summer of 2020, Rebecca became a member of the art collective " The EIGHTEEN" who created the street mural Black Lives Matter on Historic Indiana Avenue in Indianapolis during the Black Lives Matter movement. Rebecca is a proud member of the Kurt Vonnegut Museum Planning Committee, Indianapolis Caberet Board of Directors, The Indianapolis Black Documentary Film Festival Advisory Committee, and African American History Committee Advisory Board for the Indianapolis Public Library.


Other works by Rebecca Robinson