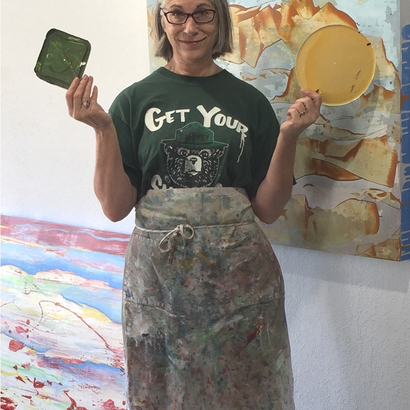 Marlene Struss grew up in California dreaming of being an artist for as long as she can remember.  She received a Bachelor of Fine Arts degree from the University of Santa Barbara in 1973, working with such esteemed instructors as Irma Cavat and Howard Warshaw. Over the years Struss has created bodies of work in media including printmaking, surrealistic montage, realistic pastel, painterly collage, digital paintings, and, at the present time abstract acrylic paintings on panel. Because she strives to succeed without succumbing to artistic trends and dictates, she has developed a highly individualistic style of painting that can be described as biomorphic abstract expressionism.

Struss has made steady progress in her career by exhibiting broadly throughout the United States, some foreign countries, and online and being involved in the arts community in Santa Barbara, California.

Among the awards she has received are the Individual Artist Award in Assemblage from the Arts Fund of Santa Barbara in 2004 and the Best in Show Award at the Westmont Ridley-Tree Museum of Art in its Tri-County Juried Exhibition in 2019.   Presently she is represented by 10 West Gallery and the Corridan Gallery and is a member of the Abstract Art Collective in Santa Barbara. She is also represented by Marina Kieser, art consultant catering to the movie and television industry, in North Hollywood. Struss's work can be seen in many television productions, including Man with a Plan, The Big Bang Theory, Mom, Lucifer, NCIS LA, By the Book, New Girl, The Better Half, Grey’s Anatomy, Ballers, and more. Her artwork has appeared in several publications, including Studio Visit, Vol. Two; National Association of Women Artists, Inc. 122nd Annual Exhibition; and Kennedy Publishing Company’s Best Of California, Vol. 1 and Best of America, Vol. 1.


Other works by Marlene Struss