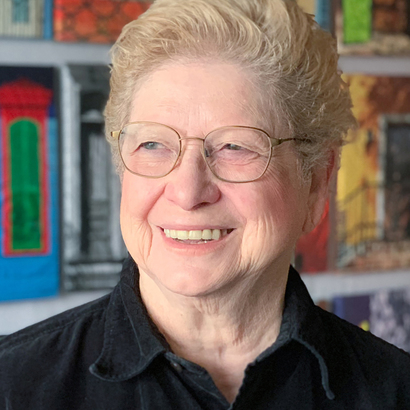 Born in New York City Marilyn Henrion is a graduate of Cooper Union and Fordham University. She is represented in the Smithsonian Institution's Archives of American Art and her works are included in museum, corporate, and private collections internationally.
As a life-long New Yorker, Marilyn Henrion's aesthetic vision has always been deeply rooted in the urban geometry of her surroundings, from the earlier geometric abstractions to the more recent mixed media works. She is particularly interested in the co-existence of past and present, especially in architecture and other man-made structures. The presence of the human hand upon the landscape expresses our eternal yearning for immortality, evidence that says “I was once here”. Much as Edward Hopper did in the 20th century, Henrion synthesizes and transforms the “facts” of the material world to reflect her experience of a particular place.
The mixed media works are composed of the artist's digitally manipulated photographs which are pigment printed on fabric and meticulously hand-quilted to animate the surface and to reinforce the presence of the human hand. The abstract, geometric works consist of pieced silks and cottons and are also hand quilted. The collage works, which do not employ stitching, consist of her digitally manipulated photographs that are printed on linen, cut apart, and re-assembled on the canvas to create the collage image.


Other works by Marilyn Henrion