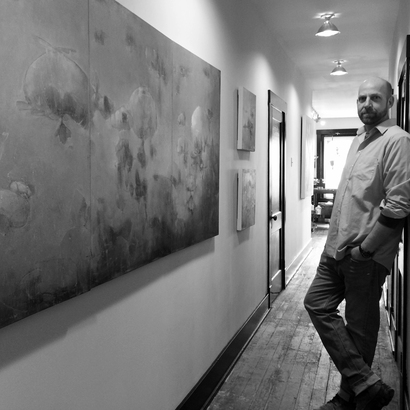 Joshua Hogan was born in Pittsburgh Pennsylvania and received his BA from Carlow College (now Carlow University). While at Carlow, he began a series of paintings inspired by his participation in the program Semester at Sea. This journey to 15 countries, including Egypt, Vietnam, Turkey, and Morocco, laid the foundation for the fluid shapes he creates today; a way to visually communicate his own interactions with people as well as the interactions he observes between people.

Hogan's paintings have an earthen foundation even though most of this is painted out with washes of Sheffield Colors in Oil, which is highly saturated thick paint. Only trace elements of the foundation burn through the finished painting. The blending and resisting of pigments are mixed with a solvent to create texture and pattern. Shapes begin to form naturally through this process which is both intuitive and open to revision. Once the initial washes are dry, Hogan builds the painting's environment using thin brushes, vine charcoal, pastel, and a black wing matte pencil. He works out the background incrouguous with the rendering of shapes using thicker brushes and palette knives. Often his imagery is determined more by painting the negative space rather than the shapes themselves. His shapes are within the background, not just sitting on top of it. With continual pushes and pulls, Hogan removes, moves, alters, and redefines the paint until the story of the painting is complete.

We are all travelers on the same path, Hogan says. “Our actions affect those before and after us. We are all both path and pedestrian, way and wayfarer.” When he visited Russia during his Semester at Sea, he skipped the scheduled museum tour and ended up meeting artists who had gathered in buildings illegally in order to make their art. Hogan witnessed how important it was for these artists to create regardless of the punishment they could endure for doing so. This experience taught him that people are always experiencing difficult times. Up until [that] point in time, he only thought about himself. But there's a whole world to consider. We’re always being influenced and influencing. We’re always finding ways to connect.


Other works by Joshua Hogan