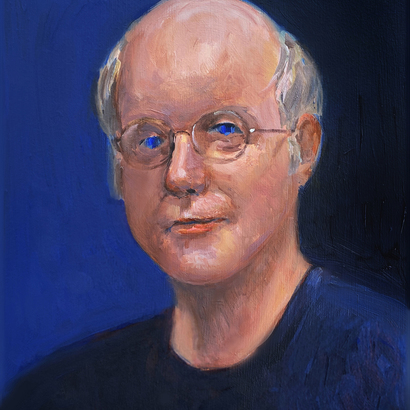 John Gummere (pronounced GUM-ree) is a 1996 graduate of the Four-Year Certificate Program at the Pennsylvania Academy of the Fine Arts in 1996, and graduated from Columbia University in 1977 with a BA in Architecture. He supplemented his coursework with art classes at various other institutions. John grew up in Trenton, NJ and spent most of his life in Philadelphia. He now lives in Bucks County, PA. His mother, Peggy Peplow Gummere, also a PAFA grad, was the "go-to" portrait painter in the Trenton area when he was growing up, and John was the one child who absorbed most of her lessons in art.

John paints with oils on canvas or panels in a representational style, with an emphasis on city scenes, landscapes, and interior compositions. Some of his favorite painters include Edward Hopper, John Sloan, and landscape painters of the 1800s. Other artists whose work is important to him include Vermeer and Rothko — an unlikely pairing. He's interested in the depth and layers of space that Vermeer used in composition: looking through a hallway or doorway into another space in the distance. Mark Rothko, an abstract painter, would appear to be the opposite of Vermeer in many ways; Rothko's work draws the viewer in with his bold rectangles and use of light and color. John uses subjects as starting points to work with light, color, composition, and different ways of using paint. At the most basic level, he simply paints because he loves to paint, and finds that in itself as a valid meaning for art. He views painting as a form of meditation and his most natural way of relating to the world. One of his favorite quotes is from Milton Avery: “Why talk when you can paint?”

In recent years John has given more thought to what my paintings are “about” on a personal, philosophical level. Many of his titles refer to a particular moment in time, like “Sunday Evening” or “Friday Night, Lafayette Street,” and this brings attention to the mood and the meaning of that moment: perhaps a quiet evening at home, or a time shared with a community of friends. Experiencing that moment makes one think of the different things going on in a scene; and if there are several people in a painting, what are the stories each of them has.

John has always lived in or near cities and often gravitated toward city scenes and subjects involving the built environment. When approaching architectural subjects in a painting he rarely focuses much on the architecture itself; he doesn’t think of a painting as a “rendering” except insofar as he wants the space to make sense. Most of the interest is about taking the geometric shapes of buildings, streets, and other elements in a space, and treating them as a composition. He enjoys the happy accidents he finds in developing a painting — when shapes seem to relate to "rhyme," or more interestingly, "half-rhyme." In recent years I’ve also worked more with non-urban landscapes.


Other works by John Gummere