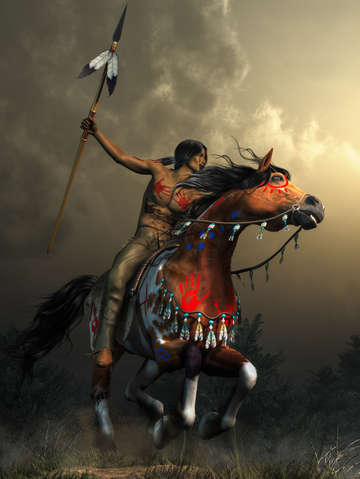 Warriors of the Plains

An American Indian brave holds his spear aloft as he rides his war horse over a grassy hill. Both the Native American man and the pinto coated mustang are warriors and wear brightly colored war paint. The man and his spear are both decorated with eagle feathers to represent courage, strength, and freedom. The horse also wears elaborate trappings. The heroic pair kick up a shower of rock and dust as they charge through the dark morning beneath cloud filled skies which threaten a stormy day.

As an artist, I very much enjoy creating scenes filled with action and movement, and, being from the U.S., I like subjects that are distinctly American. So, I find that scenes of Native American warriors usually wind up as my favorites in my gallery. "Warriors of the Plains" is no exception.

To create this artwork, I used digital art techniques: The horse and rider were posed in Poser 10 then imported into Vue 2015 where the rest of the scene was constructed. Final rendering was also done in Vue. Next, I used GIMP to do some additional painting work. Finally, I used Topaz Adjust to enhance the colors.