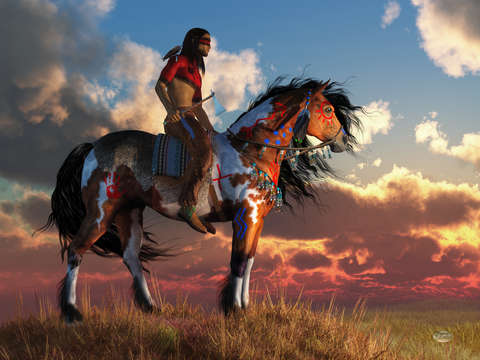 On endless grassy plains, an American Indian warrior sits on the back of his trusted war horse and watches as the sun sets in a sky filled with puffy clouds. The Native American man carries a tomahawk and wears red and black war paint. The mustang has a dun and white pinto coat and like the brave is painted for war. Its black mane and tail blow in the wind as it stands upon a grassy hill.

This is my first artwork to feature a painted Indian warhorse. Originally, I had just the horse in the image, but I decided that it needed a rider to complete this scene.

The markings on the horse have a variety of meanings: The sun around the eye is meant to give the horse keen senses. The hand print on its hindquarters symbolized that he has brought his rider back from battle unharmed. The red cross means that the horse and rider have escaped an ambush. The arrow on its neck is the fire arrow and is meant to cause harm to enemies. The hand prints on the horse's chest mean that it has pushed someone over. The zigzag is lighting to give the horse energy, and the blue dots are hail to rain down upon foes.

I created this image with digital techniques. I made the warriors leggings in Blender3D. The horse and rider were posed in Poser then imported into Vue where the rest of the scene was built. Vue was used for rendering. For post production, I used Topaz Labs' Adjust to fix the color and GIMP to do touch ups.