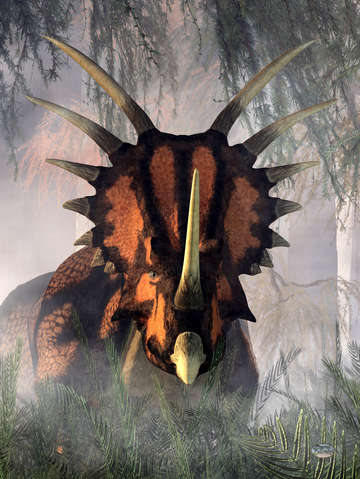 Styracosaurus in the Forest

A styracosaurus moves among the dense undergrowth of a misty prehistoric forest.

The name styracosaurus means "spiked lizard". This dinosaur was a large ceratopsian from the Cretaceous period. A distant cousin of the more well known Triceratops, this massive three ton creature sported four to six horns protruding from its frill and a single two foot long horn from its nose.

I created this work using digital techniques. The dinosaur was sculpted using Scuptris, textured in ZBrush, Rigged and posed in Blender3d, then exported to Vue where the rest of the scene was constructed and rendered. Gimp was used for post production. I also used Topaz Adjust to do some minor color enhancement.