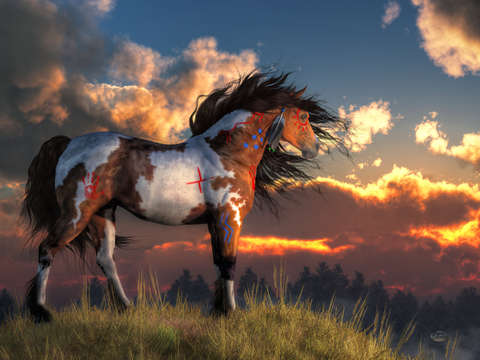 A lone mustang painted with war paint stands on a grassy hillside watching the sun set. The pinto coated horse's black mane and tail blow in the wind as the light from the sun set lights up the clouds as if they were on fire.

The markings on the horse have a variety of meanings:

For keen senses, it has the sun painted around its eye.
Because he has brought his rider back unharmed from battle, there is a hand print on its hindquarters.
A red cross means that it escaped an ambush.
The fire arrow on its neck to cause harm to its foes.
Because it has pushed a person over, the horse has hand prints on its chest.
The zigzagged lines are lightning to give the horse energy.
The blue dots are hail to rain down upon enemies.

This image was actually a bit of a follow up to an earlier image that I made of the same horse with a rider ( DanielEskridge.com/featured/warrior-and-war-horse-daniel-eskridge.html ). I wanted to create one that was the same scene but with the horse alone. I found that I rather liked the more singular focus.

I created this image using a several digital programs. The horse was posed in Poser then imported into Vue where the rest of the scene was built. Vue was used for rendering. For post production, I used Topaz Labs' Adjust to fix the color and GIMP to do touch ups including adding the war paint.