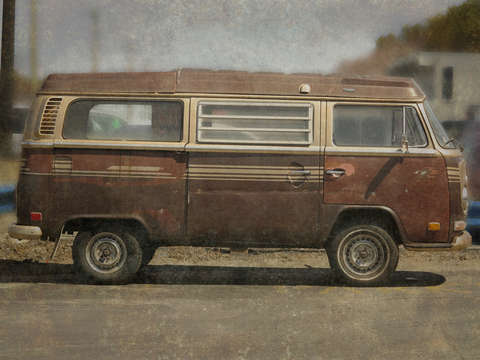 The Volkswagen Type 2, known officially, depending on body type as the Transporter, Kombi and Microbus, and informally as the Bus (US) or Camper (UK), is a panel van introduced in 1950 by German automaker Volkswagen as its second car model – following and initially deriving from Volkswagen's first model, the Type 1 (Beetle), it was given the factory designation Type 2.
As one of the forerunners of the modern cargo and passenger vans, the Type 2 gave rise to forward control competitors in the United States in the 1960s, including the Ford Econoline, the Dodge A100, and the Chevrolet Corvair 95 Corvan, the latter adopting the Type 2's rear-engine configuration. European competition included the 1960s FF layout Renault Estafette and the FR layout Ford Transit. As of January 2010, updated versions of the Type 2 remain in production in international markets— as a passenger van, as a cargo van, and as a pickup truck.
Like the Beetle, the van has received numerous nicknames worldwide, including the "microbus", "minibus", and, because of its popularity during the counterculture movement of the 1960s, "Hippie van".
Autocar magazine has announced the T2 will cease production on December 31, 2013, because of the introduction of more stringent safety regulations in Brazil.