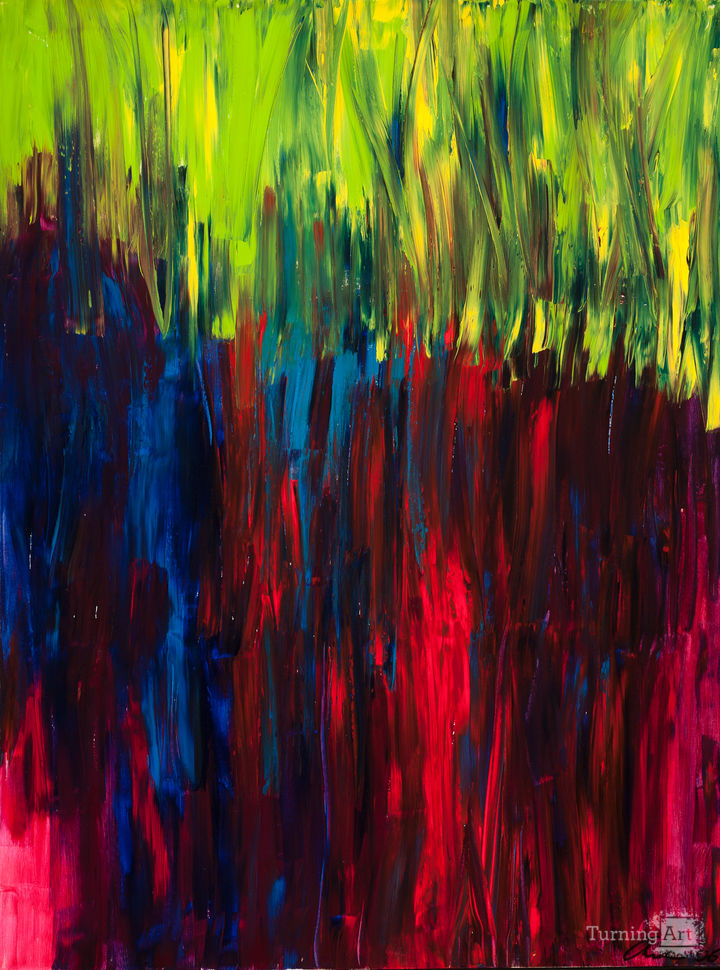 This painting is meant to be calming and energizing at the same time.

Drew is an award-winning, contemporary American artist known for his brightly colored Abstract Expressionist paintings. His art is held in private collections in the US, England, Germany, Singapore, Australia, Greece, Spain, Cyprus and Canada. His current series "Gradient" looks at ways of dividing space through color. He also known for his "shake and bake" experimental use of varied materials and chemistry including recycled paint and recycled paper, metal powder, concrete, plaster, newspaper, copper powder and iron powder. His work is experienced as emotional fuel and attempts to create a strong aesthetic — dramatic and thoughtful experience for the viewer in which they are drawn into a world of color, texture and mood. He also works in sculpture, digital and furniture making.

Inspired by physics, chemistry, nature, smooth jazz music and numerous other artists. He's inspired by the classic "Abstract Expressionists" and "Color Field" painters from the 20th Century. Sold internationally (7 countries so far), Drew has been painting and drawing since he was a teenager. His most recent solo show was in 2012, in Washington, DC. He has participated in many juried, group shows.

Carl Belz (director emeritus of Rose Art Museum) described one of his award-winning paintings: "Abstract art bespeaks freedom, for artist and viewer alike, but the best of it recognizes that freedom meaningfully exists only within limitations, thus the balance between spontaneity and order in this painting. As in life, so in art."

Today, he makes affordable art pieces with acrylics, ink and plaster. Drew's art is 'jazzy'—his paintings express and convey emotion, are typically bright and up-beat and he wants the viewer to feel something. Yet, he typically doesn't title his pieces so that the viewer or buyer are not prejudged as to the intended emotion.

His work is very colorful and has a strong graphic quality to its abstract nature. The visual elements and textures of flowers, architecture, fabrics, gardens and cityscapes are the raw ingredients which drive his inspiration, and they are often from his own photography. With each piece he aims to create something dramatic and interesting.