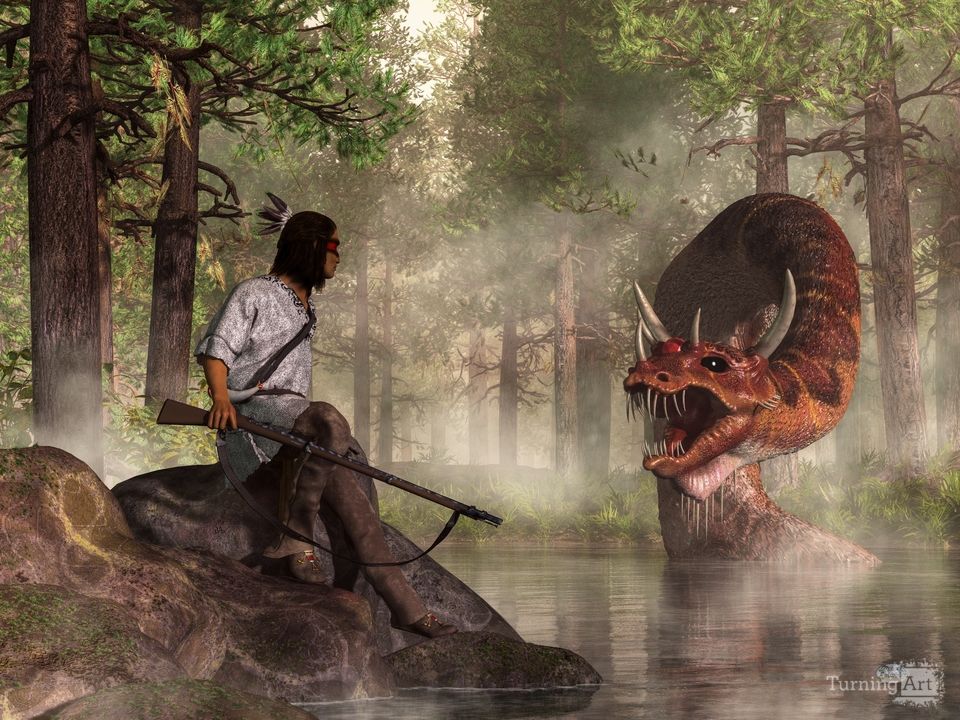 Native American folklore has no dragons, but there are a couple of close analogs. One is Quetzalcoatl, the feathered serpent, of the Central American cultures which looks a bit like the oriental dragons. In North America, however, there is the Uktena, the horned serpent, found particularly in the Southeast.

Uktena was a giant snake covered in shining scales with horns on its head and a single giant crystal, called Ulun'suti, in it's forehead. They lived in the water and were often associated with the elements of storms: rain, thunder, lightning. Its breath was said to be lethal (though not specified as fiery, this is still another similarity with dragons).

One particular legend involving Uktena, is that of Aganunitsi. Aganunitsi was a powerful Shawnee medicine man who was captured in a battle with the Cherokee. Rather than being executed by his captors, he volunteered to hunt the Uktena and bring the Ulun'suti back to them. He searched for the beast through the southern Appalachians. As he got closer to the great snake, he started to encounter giant frogs, snakes and other monstrous reptiles made so by their proximity to the Uktena. Eventually, he finds the Uktena near Gahuti Mountain (in what is now Fort Mountain State Park in North Georgia). He kills the beast and returns to the Cherokee with the jewel and afterwards lives with them as an important member of their tribe.

I especially like the legend of the Uktena as, being Creek folklore as well as Cherokee, it was likely told of by some of my ancestors. Also, the story of Aganunitsi takes place from not far from where I live. I've actually hiked Fort Mountain State Park.

When it comes to stories like this, there is generally no canonical version and the details are often different from one telling to another. I decided to add my own detail in that the hero is carrying a musket and powder horn rather than the more traditional bow and arrow as such weapons were quite common among the southeastern tribes in the late 18th century.