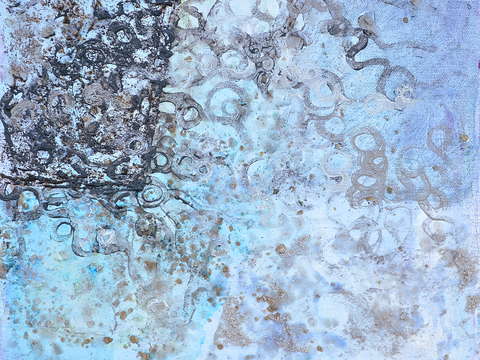 Quantum Mechanical tunneling happens when, According to Classical Mechanics there’s a barrier or wall. The energy to hop over the wall is more than is possessed by any of the particles blocked by the wall (or barrier). So in Classical Terms, those particles should be stuck on their side of the wall. In Quantum Mechanics, there’s also an Uncertainty factor, which tend to soften up Classical Walls, allowing some of the particles to leak or “tunnel” through the barrier. This idea was used to create the Scanning Tuneling Microscope, which could attain atomic resolution on atomically flat conductive samples.

Other scanning probe microscopies followed, but most of the in plane atomic resolution seen for the non-tunneling varieties has been well debunked.

In the painting “Tunneling Regime”, mica and other textural materials are used to create a granular space for the quantum tunneling particles, and the particle waves tunneling through are swirling helicoids. To be accurate, the Planck length granularity of space time is much much smaller than particles that can tunnel, and the waveforms aren’t accurate either. It is after all Art, and not a Physics illustration.