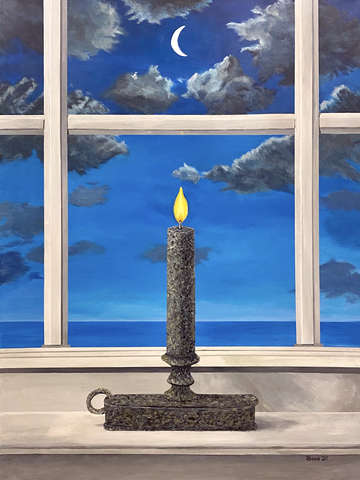 The Weight of Light

Many of my paintings have been inspired by the Belgian master surrealist, Rene Magritte. Magritte had a number of paintings featuring objects that he depicted as being made of stone and also liked to combine day and night into a single visual. While listening to Elton John's "Candle in the Wind" song, I got to thinking about a candle as the key visual of a painting and decided to try and create a candle and candle holder that were made of stone. Originally, I was going to call this painting, "The Eternal Flame". But when reminded that was the name of the candle that burns at JFK's grave, I decided to opt for something different. We had a great discussion about whether the candle should be reflecting in the window. The thought was that the light from the moon was so bright that it cancelled the effects of the brightness of the candle on the other side of the window. I had also considered the phrase, "We'll leave a light on for you", awaiting someone's return. So I considered calling it "The Wait of Light" but ultimately, settled on this title. Whatever you call it, I think it's a striking image, especially when seen in person due to its large size. I hope you like it!