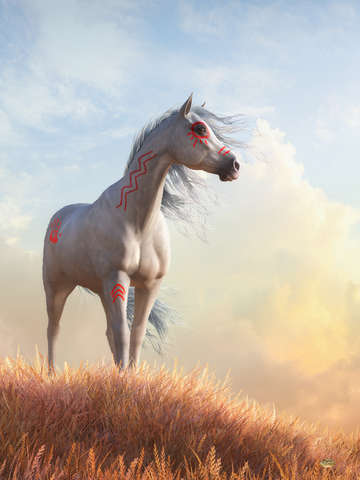 On the plains of the American Wild West, a lone white horse wearing red war paint stands on a grass covered hill.  It's sunrise  and the sun bathes the scene in a golden light.
Meanwhile, the wind blows across the prairie, picking up the mane and tail of the Indian pony.

For this one, I was inspired by the horse Silver, the trusty companion of the Lone Ranger.  I watched the show quite a lot as a kid, though I barely remember now.  There was also a movie I saw a few years back, but it was not very good and quite forgettable.  Anyhow, I don't watch a lot of TV these days, but when I do, my television has to take a minute or two to boot up the internal computer so I can watch Netflix.  During that time though, one of the local on-the-air channels is on showing old TV shows from the 60's and 70's.  One day, it was showing the Lone Ranger, and I though it might be fun do create an image of Silver.  To make the scene a bit more interesting though, I decided to give him some war paint.  Also, to make the horse appear more "silvery" I gave him more grey accents in this mane and tale and added a bluish bounce light. For some reason I reversed the image and liked it better, so I guess whomever painted this horse was left-handed.