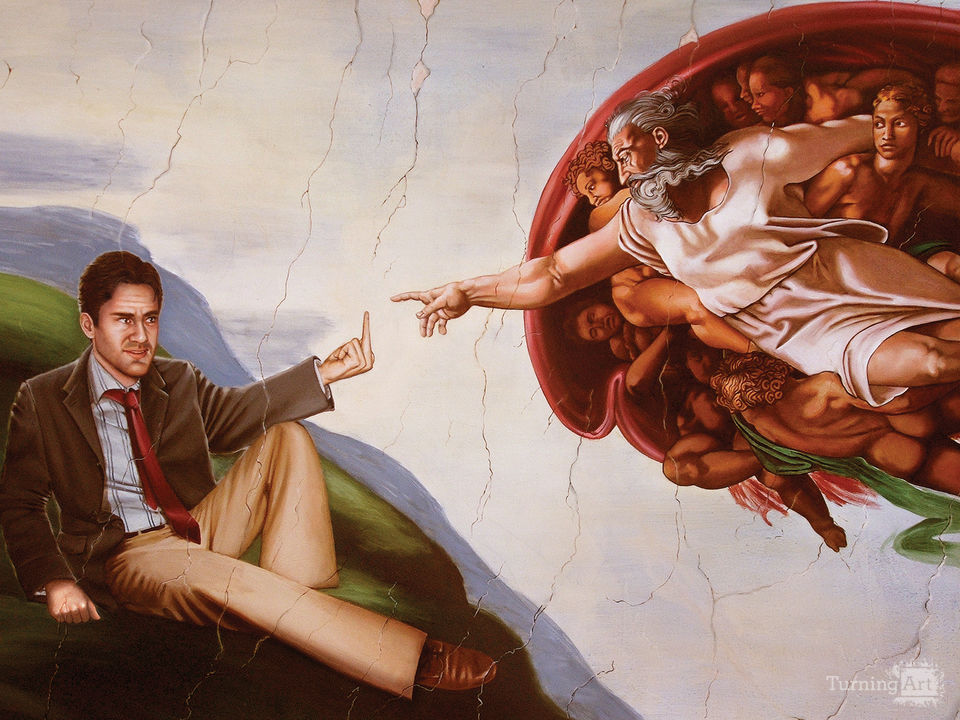 The Creation of Micah

This is the book cover illustration for "How to Succeed in Heaven Without Really Dying"; a comic take on Michelangelo's "The Creation of Adam". The original painting differs slightly from the image featured on prints.

Other works by Adam Mcdaniel

Adam McDaniel grew up in Connecticut and New Jersey. He attended New York's Vassar College, winning honors at various festivals for his student film work and receiving the college's academic film & cinematography prize upon graduation. He also wrote and directed a stageplay there that had the misfortune of opening the same night as an on-campus Billy Joel concert.

Drawing since an early age, he is largely a self-taught artist with no formal training. In high school his artwork won several local and regional art competitions, but while at Vassar, McDaniel was so disenchanted by the college's studio art program that he dropped out of it after just one class. Upon the recommendation of an upperclassman, he turned to theatrical set design as a creative alternative.

Following graduation, McDaniel went on to serve as a technical director and set designer for several theatrical stage shows, and as a production designer and cinematographer for independent films and documentaries. He has worked with such companies as Walt Disney Pictures, Revolution Studios, Big Ticket Television, film school Columbia College Hollywood, and spent nearly a decade at Ascent Media, a leading post production company. He currently spends his time digitally tinkering with movie posters for Warner Bros. Digital Distribution Services, and continues freelance work in illustration, web design, and writing on the side.

With lifelong interests in both art and film, McDaniel's definitive website about the life and career of American illustrator Richard Amsel generated considerable interest, and has helped to rekindle awareness of the late artist's work. (McDaniel is now involved with a special art retrospective that opened in Philadelphia in April 2009.

He also authored the novel How To Succeed in Heaven Without Really Dying, and screenplays that have been featured on such entertainment websites as Aint It Cool News. McDaniel's second book, Chasing Echoes Through the Dark, is expected for release in 2013.