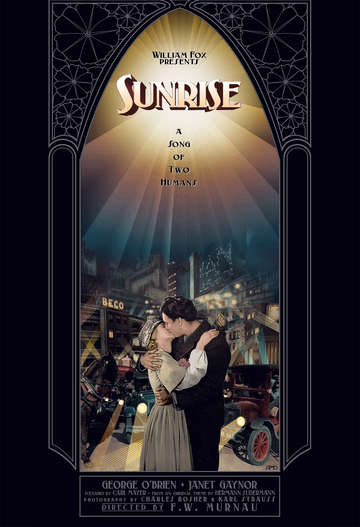 Sunrise: A Song of Two Humans

Murnau's SUNRISE has long been one of my favorite films — as well as a giant of the silent film era. I wanted to give it the "epic" poster it never had. It was also an experiment in creating something almost exclusively digital, which was not customary for me.

The image was made from a combination of movie stills, literal DVD freeze-frames, and hand-painted watercolor elements that were scanned and filtered in Photoshop. I tried to give it a silkscreen / woodcut effect, using a palette of only nine colors for an antique, period feel — something inspired by the art of the great Laurent Durieux. The process took over 200 layers and two weeks.

I was very proud to have this artwork featured at the 90th anniversary screening of the film, hosted by the Academy of Motion Picture Arts & Sciences in April 2018. It was also featured at a revival screening within Chicago's Music Box Theatre.