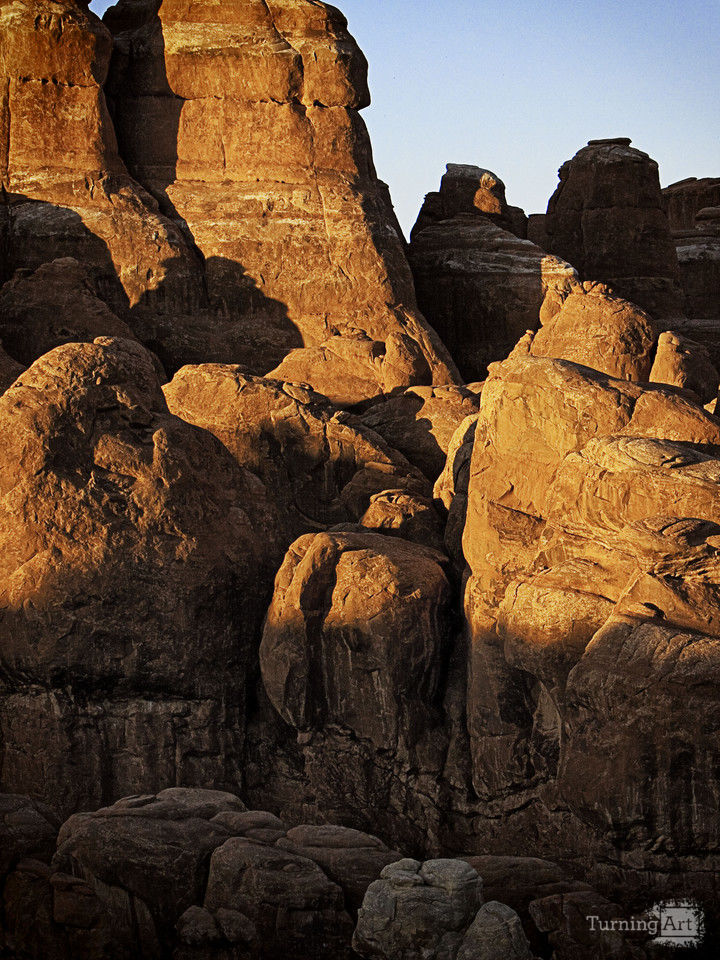 I saw this area of Arches National Park in morning light, and, after a quick look at the sky, realized the stones would most likely look their best in those magical moments as the sun slips below the horizon. It was fascinating to watch the color shift from orange to red, and then into blue and purples.

Other works by Bill Mcclaren

Bill McClaren was born and raised in Dallas, and attended the University of Texas, Austin. After college he moved to New York City but realizing how much he hated snow, he ultimately relocated to San Francisco then Santa Fe, NM. McClaren has always owned a camera of some kind, but in 2002, when he believed the technology was at last up to par with film, he purchased his first digital camera. By 2007, he was a Testing Photographer for all the major agencies in San Francisco, including "Ford":http://en.wikipedia.org/wiki/Ford_Models, Look and City Models. In late 2008, he realized his love of photography wanted him to be doing much more than shooting "pretty people." While he still shoots commercial shots on occasion, he has found his "calling" in Fine Art Photography.

In 2011, Mr. McClaren organized a group of "Bay Area Fine Art Photographers," which used his studio in West Oakland as a home base. In addition to planning monthly gatherings, he led workshops on subjects such as lighting, concept and vision, and teaching digital photographers the joys and frustrations of working with film. In early 2012, Bill relocated to Santa Fe, NM, where he is exploring alternative processes such as Oil Prints, VanDyke Brown, Cyanotype, Carbon Transfers, and Wet Plate Collodion. He continues to work with both digital and film images.

Bill's images have been exhibited in several solo and group exhibitions, notably "Strange Beauty" and "Low-Tech" at The Center for Fine Art Photography in Fort Collins, Colorado; "Renovations" at Gallery 46 in Oakland, California; "Mixed Media Miniatures" at The CK Gallery, Oakland, California; "One Eye Shut" at the Olive Hyde Gallery in Fremont, California, and "Light Sensitive" at Art Intersection in Phoenix, Arizona. From January into March of 2013, his work was shown in the annual Juried Exhibition at the Center for Photographic Arts in Carmel, California (Jurors: Dean Brierly and Chris Johnson).