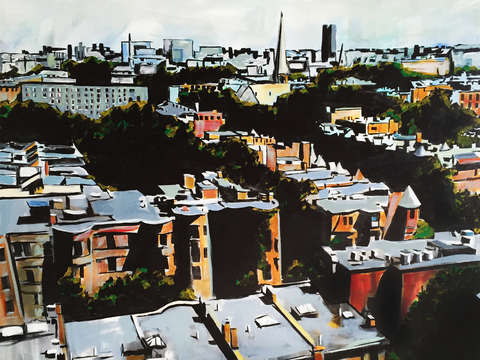 The South End, once considered a jazz mecca up until the 1950's, is a neighborhood of Boston, Massachusetts, distinguished from other areas by the Victorian row houses. These distinct red-brick, bow-front homes are considered to be the largest intact Victorian row house district in the country. Among the homes are numerous restaurants, parks, churches, and cathedrals with steeples rising far over the neighborhood's skyline. The area is known as a proud gay, artistic, and cultural neighborhood although rising costs threaten this character. Unlike in many other metropolis cities, there are no policies to help artists keep their long-term studios. Jodie was thinking about this as she captured a photo from a hotel rooftop looking back onto the South End. This photo became the inspiration for this painting; the steeples a reminder to rise above.