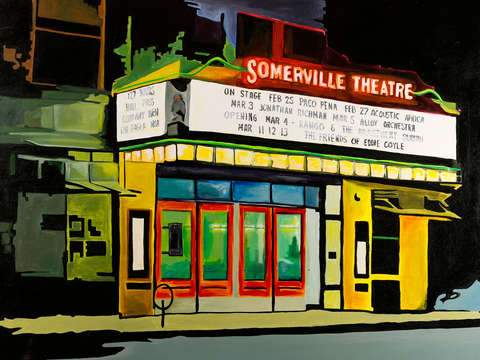 The Somerville Theater and the Hobbs Building were built in 1914 by Joseph Hobbs and designed by the firm of Funk & Wilcox of Boston. Designed for stage shows, vaudeville, opera, and motion pictures, the theatre is now known for showing second-run movies and also acts as a concert venue.

In 1915, the Somerville Theater Players began their stock company presentation of weekly play performances. Among the notable players who came up at the Somerville were Tallulah Bankhead, Kay Corbett, and Francis X. Bushman. Future film director Busby Berkeley (famous for 42nd Street) directed many shows at the Somerville in the mid-1920s.

The Theatre is close to Jodie's heart, as this was the first venue for her annual film festival, The Glovebox Short Film & Animation Festival.