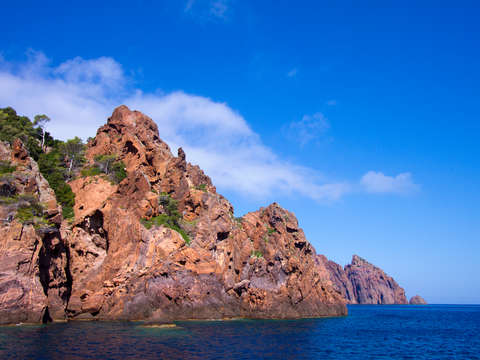 Heading out from the town of Calvi, I traveled down the coast to the Scandola Nature Reserve, a peninsula which is only accessible by boat. The voyage over open water was very rough, but on arrival I was greeted with a stunning landscape composed of a series of sheer cliffs, inlets and caves carved in unforgettable red geologic forms.

Working quickly I captured these amazing cliffs, monolithic landscapes and narrow passages between the rocks. The resulting images are an incredibly tight series juxtaposing the forms against sky, clouds and sea. Each image in the series builds a story of a place which is so unique, perfectly untouched, and exquisitely formed that it might be imaginary.