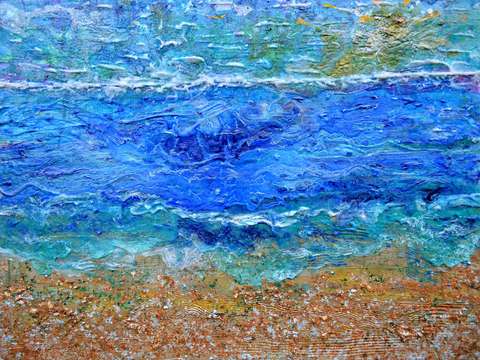 Rhapsody on the Sea

In other works extruded transparent and translucent media were layered over and under liquid media of varying transparency, translucency and tint. This approach creates a transparent paint film with a tangible depth. Ghostly textures can be incorporated into the transparent film by layering extruded heavy gels under the more liquid media. Marbled effects are achieved by tinting liquid media. Combinations of metallic paint, powder and foil create active metallic areas with a lot of movement.

These ideas are all incorporated into Rhapsody on the Sea, creating an abstracted seascape that is textured, turbulent, full of soft detail down to the microscopic level, active and changeable.

New ideas are incorporated as well.
Areas of the “sand” were built up using large flat mica flakes mixed with soft gel medium. The flat mica flakes naturally form irregular stacks and they have a soft almost metallic sheen. When combined with the metallic foil gilt and painted surface of the shore line in Rhapsody, they create interesting textural contrasts. Gilding with foil on top of portions of the mica stacks helps integrate the metallic and mica textures and keeps the light moving.

Silver foil was applied on top of rake textured gesso in areas of the sea. Blue tones representing water were added in layers of tinted and textured liquid and gel media. Silver colored metal leaf was incorporated in areas in between the transparent blue layers. The wrinkling and high reflectivity of the metal leaf reflects light and casts it into the paint film, creating a subtle water-like shimmer in places.

Shellac inks were added to change the mixing behavior in layers of color where marbled effects were engineered in. Glass beads were used as both texture elements (flow manipulators) and as light reflectors.