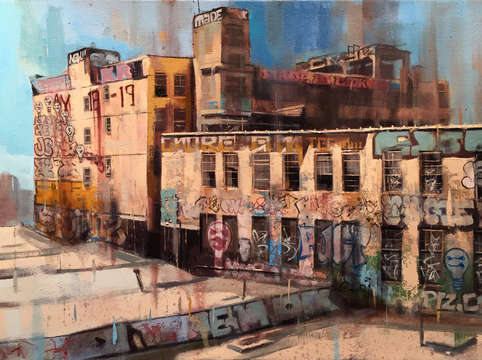 A number of paintings in this exhibition have captured these places that are now gone. One in particular is the Phun Factory in Queens, New York. The building was one of my favorite places in Long Island City and of Hunters Point. For decades, the former factory was hailed as the center of street art or at least certainly one of its strongest facilitators. The building itself is not architecturally significant, but was home to many graffiti artists and their studios. It was great to be in that area in the early nineties to see how the building was tagged. I documented it on many occasions and at different times of the day to see the attitude change from the natural light as well as the effects against the graffiti. The two paintings in the show reflect that attitude and reveal the character of the structure from two very different perspectives.

The painting, “Phun Factory” brings the viewer onto the structure itself. Seeing the windows open reveal the constant aerosol fumes in the air as well as the summer heat baking the building like an incinerator. Anyone who understands this has endured the suffocating summers of a city, especially during late July and August. It also reveals a number of different tags on the canvas of the building that is the intriguing part.