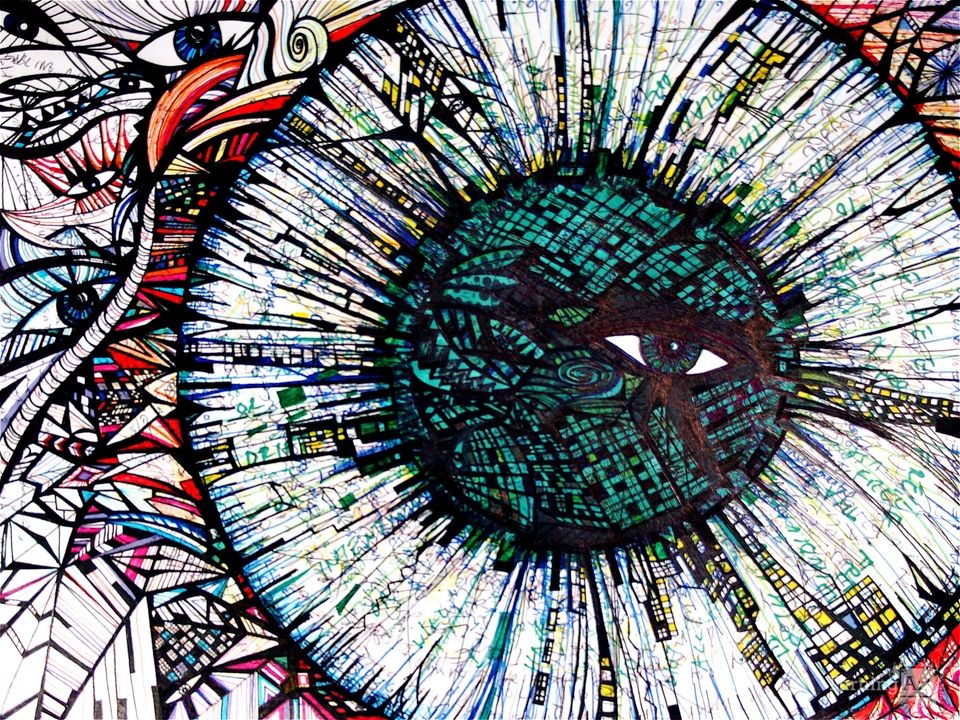 My art emerges through emptying and meditating; the process starts in reflecting and pouring out in streams of consciousness so that I may vividly create art and live from my core. The art itself is the process of transformation; akin to shedding skin, letting go of the surface layers that get in the way of truly seeing.

Other works by Vanessa Chakour

Vanessa Chakour is an artist, athlete and creative entrepreneur. Her artwork energetically combines colors, movement, concepts, and dreamscapes. In her distinctive style of Visual Verse, every brushstroke is a string of words- a lyric, poem, or free association. The influence of music on her art can be seen in its rhythm, fluidity, and movement. Music has always been an integral part of Vanessa's life. Born into a family of musicians and creative thinkers, Vanessa grew up in a diverse cultural playground. Her childhood home was a revolving door of musicians from all walks of life. Her father performed with many blues artists, including Howlin Wolf, Big Mama Thornton, BB King, and many others. He was Joe Cocker's musical director when Vanessa was a little girl. She was immersed in music at home, backstage, and in the studio. Music remains a driving force in her work.

Another pivotal experience in Vanessa's life was a car accident, which nearly paralyzed her as a teenager. She miraculously emerged from this experience a stronger person. Art and writing became powerful tools for healing, release, and survival. Once healed, she continued to test her physical and internal boundaries by becoming a professional boxer. The internal strength she developed through boxing allowed her to dive deeper within herself for greater release in her art. This gave birth to her distinctive style and her coaching philosophy, which she imparts through her brand, Sacred Warrior. Vanessa is an Athlete Ambassador for Right To Play and has spoken at the United Nations on their behalf. She is the founder of The Hip Hop Loves Boxing programs in NYC and LA, and continues to use her artwork to raise funds and awareness for different causes including the War Resisters League and the J Dilla Foundation.

Vanessa has had her art featured in prominent private collections, as well as public exhibitions. She has also been a featured artist in renowned galleries throughout New York. Agora Fine Art Gallery in Chelsea, New York City said this about her work: "Vanessa Chakour's kinetic works are about freedom: freedom to think, freedom to feel, freedom to remember, freedom to meditate, freedom to explore and freedom to move forward. Her images function as politically, culturally aware streams of consciousness, at once reacting to the injustices of recent history and the lively kinesthesia of daily life." She is currently working on a music-inspired series, and a series of pieces exploring lucid dreaming practices informed by different indigenous and spiritual traditions.