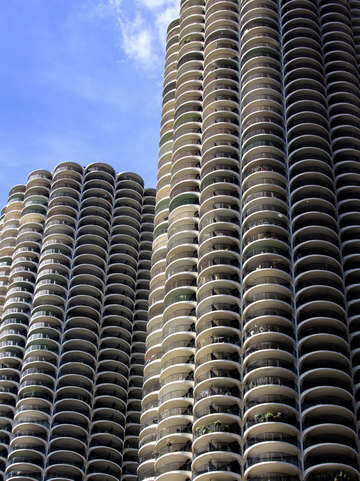 The Marina City complex was designed by Bertrand Goldberg as a “City within a city” and completed in 1964. The two 61-story twin towers reach a height of 587 feet, and when completed were the tallest residential buildings in the world as well as the tallest reinforced concrete structures. This was also the first time tower cranes were used for construction. The complex occupies an entire city block along the bank of the Chicago River and includes the twin towers, a public concourse & plaza, a 16-story commercial office building, a theatre complex (which is now home to House of Blues), a bowling alley, a swimming pool, 3 restaurants, ice rink, sky lobby observatory, a 360 ° open-air rooftop deck, and of course a marina. The ice skating rink was removed to make room for a new restaurant, and Hotel Chicago now occupies what was once the office building. The towers have won numerous awards for design & innovation, and the design has since been copyrighted as intellectual property of the residents. Marina City has been featured in such Hollywood productions as The Hunter, The Blues’ Brothers, Ferris Bueller’s Day Off, The Dark Knight, Transformers: Dark of the Moon, and were featured on Wilco’s 2002 album cover for Yankee Hotel Foxtrot.