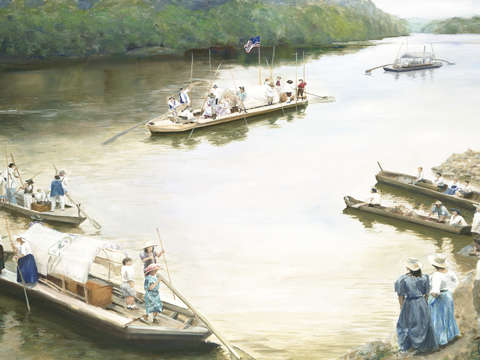 Commerce on the James River during the early days of this great nation was a challenge for some and an adventure for others. Flat-bottomed boats, or "bateau" as they are known, were a common sight along the James River from the Chesapeake to Lynchburg and all points in between. Measuring from about 40 to 60 feet in length and about 7 feet wide, the batteau were used to haul cargo including hogs, tobacco, and passengers.

The batteau were maneuvered gently down river through the waters of the James River and "walked" upstream by the crew who stood on the outer boards and sank their poles into the bottom of the river. Once in position, the crew would face backwards and "walk" in place while the batteau moved forward beneath them. Once the rear of the batteau's stern reached the crew member, he or she would walk up the middle of the batteau towards the bow and start the process all over. Tedious and tiresome, the method was an effective way to reach your destination. 'Launching a Nation' exemplifies the lifestyles of those who ventured onto the highways of early travel by river.