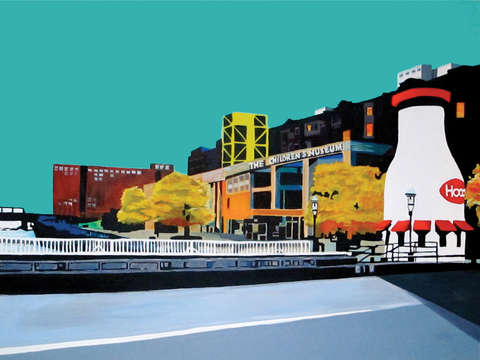 Located In Fort Point since April 20, 1977, the Hood bottle was shipped by ferry to Boston on a voyage it called the "Great Bottle Sail." The structure is 40 feet tall, 18 feet in diameter and weighs 15,000 pounds. If it were a real milk bottle, it would hold 58,620 gallons of milk.

The bottle recently underwent extensive renovations in fall 2006. The bottle was "uncapped" — its original top half was sliced off and preserved—so that its base could be moved slightly and rebuilt on the new Hood Milk Bottle Plaza. A renovated bottle was put back in place and officially re-dedicated by Boston Mayor Thomas Menino on April 20, 2007, thirty years to the day after it was moved to Children's Wharf.

Fort Point is the home of the artist.