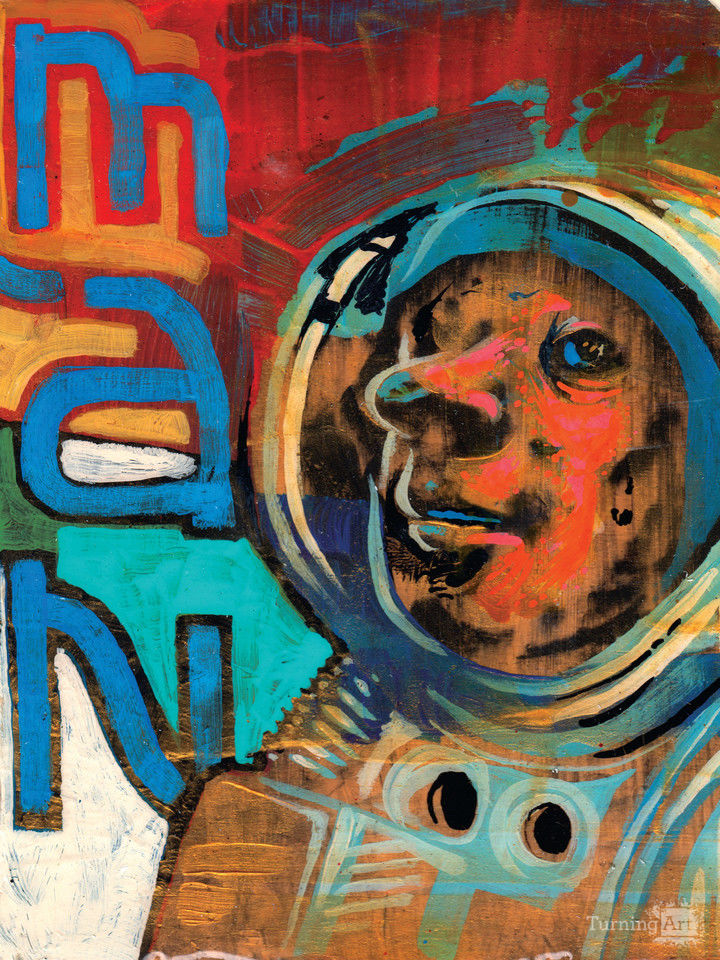 Gifting Himself to the Heavens, 2089

Somewhat confusingly, this piece has gone through many name changes over the course of its lifetime. Created in the late Spring of 2011, it started its life as a painting with the name "I'll buy the moon at this time", only to later become renamed "Space Race 3140" for the vague and perhaps totally unneeded purposes of a café show in Salem, Massachusetts in 2012. Now, it finds itself with the title "Giving Himself to the Heavens, 2089", and I suppose that most of that tentative naming strategy points to the strange nature and general whimsy of the work.

In essence, it was a free-form, fun exercise in working more graphically than I had in the past. In fact, most of the pieces created alongside this in the Spring of 2011 were, comparably, much darker in both appearance and subject matter – dark, shadowy faces, starry skies, ominous abiguity, nods to themes of strife and interpersonal conflict. What remains here is a peculiarly light addition of work reminiscent to something Bradburian or just altogether nerdy that stands in direct opposition to a period of otherwise forlorn work.

Other works by Andrew Marathas

Originally from southern Massachusetts, Andrew has been painting and drawing since an early age. In 2003, he started classes at Montserrat College of Art in Beverly, MA, following a path of various studio and design classes that would eventually lead him to graduating in May of 2007 with a degree in Illustration. Since then, he has been in various shows in and around the Boston area that include select pieces from both his professional and personal work.

His work, mainly on found pieces of wood – often dilapidated or reclaimed – depicts the world around us through bright colors, sharp metaphor, and a curious kind of humor that often finds itself pleasantly tongue in cheek or altogether mysterious. Often shown with the idea of it all being an ongoing series with intrinsic similarities and shared symbolism, there is to be found in the work an implied narrative running through most of the
work that makes either subtle or severe nods to personal endeavors, world issues, and classic themes.