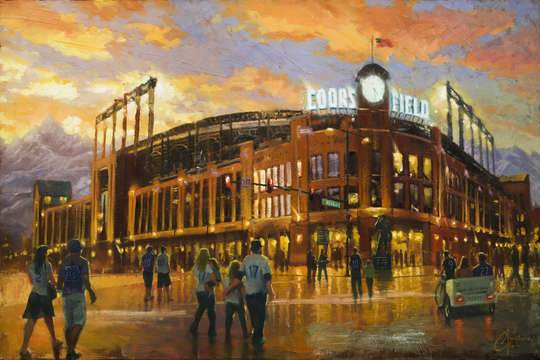 Coors Field is one of the most recognizable baseball stadiums in the U.S. Nestled right in the middle of the lower downtown portion of Denver, CO, Coors Field becomes a hub of excitement on game days. Christopher Clark has found a way to capture the emotion, movement, and action going on around the stadium as fans start making their way to the game.

There are lots of hidden features to look for that remind us of the Rockies history. Try to find them all.
Colorado Rockies logo in the Mountains.
Pedicab license plate represents the first game played at Coors Field: April 26th, 1995.
“2007” on the jerseys of 2 fans represents the year the Rockies went to the World Series.
The clock atop Coors Field reads 5:28 representing 2 Rockies players: #5 Carlos Gonzalez and #28 Nolan Arenado.
Fan Jerseys represent #2 Troy Tulowitzki, #33 Larry Walker, #9 Vinny Castilla, #10 Dante Bichette, and #19 Charlie Blackmon.
The family of 4 wearing all #17 jerseys represent Todd Helton and his family.
Jersey #27 is worn by a fan in the pedicab representing Rockies Rookie Sensation Trevor Story.