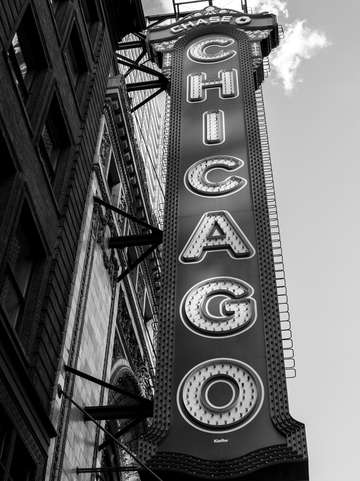 The Chicago Theatre opened in 1921 on State Street in Chicago as the flagship of a large chain of opulent motion picture houses in the Balaban & Katz chain, and is now the oldest surviving grand movie palace in the U.S. Upon opening it was dubbed the "Wonder Theatre of the World". At the time of the building's 1978 application for the National Register of Historic Places designation, the venue's marquee had been replaced twice 1922/23, 1949). The 1949 replacement was similar to the second marquee, but its attraction boards were larger and the oversized CHICAGO lettering only appeared on the front. The entire marquee was replaced in 1994, but retains the look of its 1949 predecessor, and the original marquee was donated to the Smithsonian Institution in 2004. The marquee is featured in numerous movies and TV shows set in Chicago, and its neon font was used in the title of the 2002 film "Chicago", and to this day is referred to as the "unofficial emblem of the city". The vertical sign "C-H-I-C-A-G-O," at nearly six stories high, is one of the few such signs in existence today.