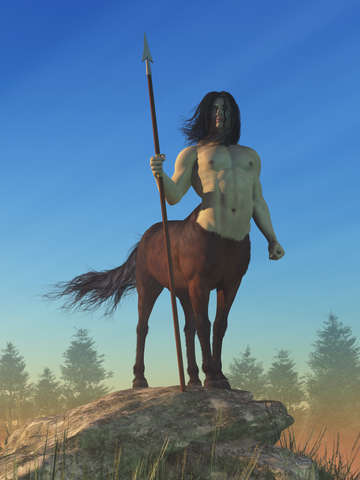 A being of myth, half horse, half man stands atop a large rock with a spear in hand.  This is the legendary centaur. 3d rendering

The centaur was a creature of Greek Mythology, the most famous of which as Chiron, who was said to have Heracles.  Centaurs were attributed to a very wild nature.  Some scholars suggest that the myth originated with the ancient first sighting of nomads on horseback.  No matter how they originated, Centaurs are a common creature throughout not only ancient legends, but medieval as well and are also well known in modern fantasy literature.

The zodiac symbol for sagittarius is a centaur holding a bow.

For most of 2020, I was working on Greek Mythology themed images.  This was part of that effort.

Thanks for looking,
Daniel