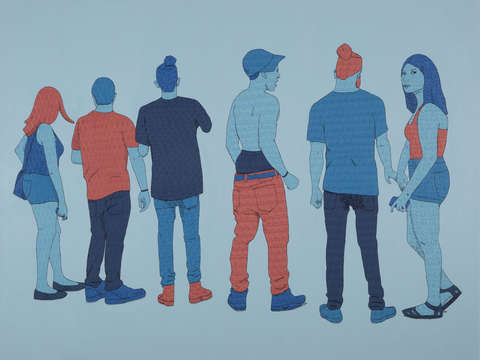 Boyer’s "Gather" Series depicts groups of people spending time together in public spaces. The works range from a single portrait to groups of ten with a focus on leisure and entertainment. Although the group is often diverse, Boyer creates similarity by using the same set of colors throughout the scene so that there is no difference in clothing and skin color between figures.

Boyer’s figures explore how we see each other through the lens of our beliefs. Some of our beliefs are shared with a larger group, such as culture or politics, while other beliefs are based on our experiences. These beliefs can have negative connotations when used generally as stereotypes, but can also be more nuanced and positive. Our preconceptions inform whether we think a stranger is friendly or hostile and provide a framework for anticipating how others may react. Boyer’s characters embody this dichotomy of being individuals while representing a larger idea. Their individuality shines through their features and gestures, while a layer of small iconic shapes on the surface of each person link them to an underlying idea and the theme of each series.