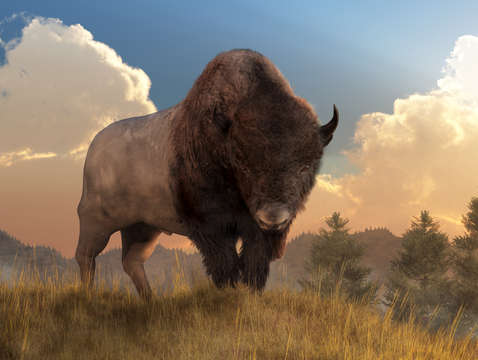 A bison, also known as an American buffalo, stands on a hill and looks back at you, the viewer, with a gaze that is a mixture of menace and challenge. Apparently, you’ve done something to make this massive animal of the American West quite angry.

The bison bull stands among long dry grass on a late summer evening. Behind it, a few fir trees jut into the sky where the sun has just dipped behind a few clouds to create a bright golden sunset.

This is inspired by classical Western paintings which were made when bison were almost always referred to as "buffalo". Hence the title uses that name rather than "bison".

I made this work using a variety of digital techniques starting with 3D Rendering and including digital painting and color enhancement.