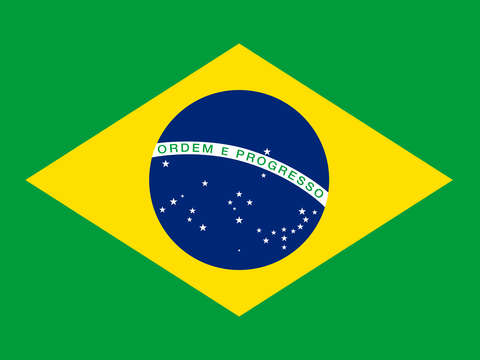 Brazil, officially the Federative Republic of Brazil is the largest country in both South America and the Latin American region. It is the world s fifth largest country, both by geographical area and by population. It is the largest Lusophone country in the world, and the only one in the Americas. Bounded by the Atlantic Ocean on the east, Brazil has a coastline of 4,655 miles. It is bordered on the north by Venezuela, Guyana, Suriname and the French overseas region of French Guiana; on the northwest by Colombia; on the west by Bolivia and Peru; on the southwest by Argentina and Paraguay and on the south by Uruguay. Numerous archipelagos form part of Brazilian territory, such as Fernando de Noronha, Rocas Atoll, Saint Peter and Paul Rocks, and Trindade and Martim Vaz. It borders all other South American countries except Ecuador and Chile and occupies 47 percent of the continent of South America. Brazil was inhabited by numerous tribal nations prior to the landing of explorer Pedro Ailvares Cabral in 1500, who claimed the area for Portugal. Brazil remained a Portuguese colony until 1808, when the capital of the empire was transferred from Lisbon to Rio de Janeiro after French forces led by Emperor Napoleon Bonaparte invaded Portugal. In 1815, it was elevated to the rank of kingdom upon the formation of the United Kingdom of Portugal, Brazil and the Algarves. Its independence was achieved in 1822 with the creation of the Empire of Brazil, a unitary state governed under a constitutional monarchy and a parliamentary system. The country became a presidential republic in 1889, when a military coup d'etat proclaimed the Republic, although the bicameral legislature, now called Congress, dates back to the ratification of the first constitution in 1824. An authoritarian military junta had led the nation from 1964 until 1985. Brazil s current Constitution, formulated in 1988, defines it as a federal republic. The Federation is composed of the union of the Federal District, the 26 states, and the 5,564 municipalities. The Brazilian economy is the world s seventh largest by nominal GDP and the seventh largest by purchasing power parity, as of 2012. A member of the BRIC group, Brazil has one of the world s fastest growing major economies, with its economic reforms giving the country new international recognition and influence. Brazil s national development bank (BNDES) plays an important role for the country s economic growth. Brazil is a founding member of the United Nations, the G20, CPLP, Latin Union, the Organization of Ibero-American States, the Organization of American States, Mercosul and the Union of South American Nations. Brazil is one of 17 megadiverse countries, home to a variety of wildlife, natural environments, and extensive natural resources in a variety of protected habitats. Brazil is a regional power in Latin America and a middle power in international affairs, with some analysts identifying it as an emerging global power. Brazil has been the world s largest producer of coffee for the last 150 years. The 2014 FIFA World Cup will be the 20th FIFA World Cup, an international men s association football tournament that is scheduled to take place in Brazil from 12 June to 13 July 2014.