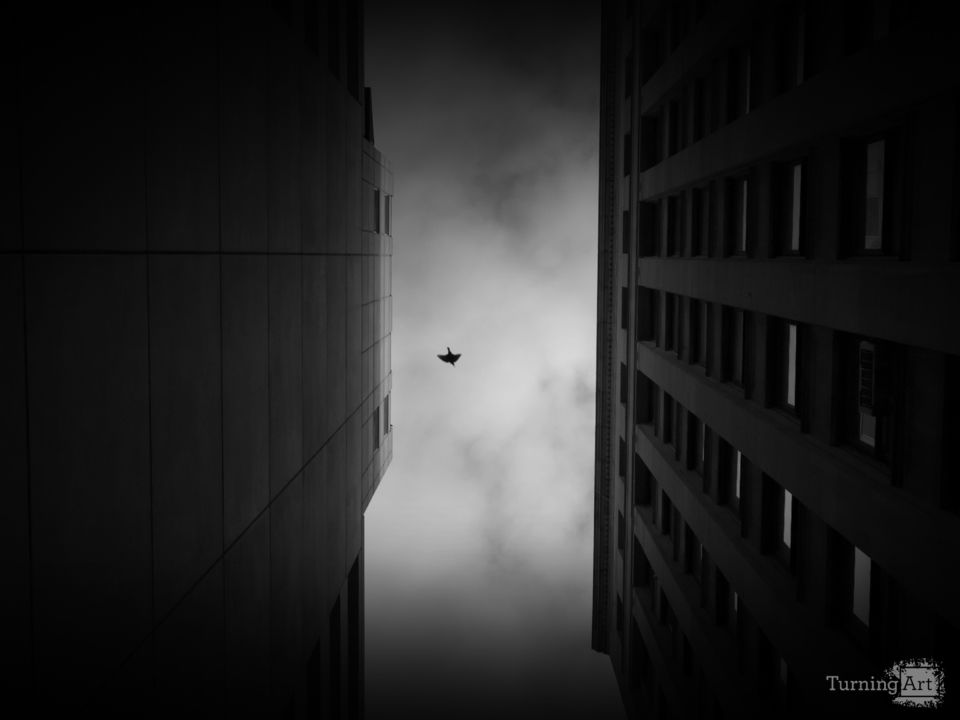 One day while walking through an alley in downtown Detroit, Michigan, I looked up and noticed several birds flying between the two buildings. However as soon as I brought the camera to my eye, I had already missed the opportunity. I was unable to capture a bird in the right spot when I first "saw" this photograph, so I decided to revisit the alley on the following day. Fortunately, I was able to capture this lone bird in flight within less than a minute upon walking up to the same spot.

Other works by Jon Deboer

Jon DeBoer is a photographer and graphic designer living and working in Detroit, Michigan. Jon participated in classes on photography while enrolled at Lawrence Technological University, where he received a Bachelor of Fine Arts in Graphic Design in 2010. His background in graphic design and interest in architecture has strongly influenced his approach to photography.

In 2009, Jon began exploring the city of Detroit and has been photographing the evolving urban landscape ever since. In addition to his cityscape and architectural work, Jon also works as a freelance commercial and event photographer. He has worked as the photographer for Detroit’s soccer team Detroit City FC since their first season in 2012. His work has also been featured in various news sources and magazines including: Novum: World of Graphic Design, Metro Times Detroit, Detroit News, Detroit Free Press, and Crain's Detroit Business.

Jon’s work has been exhibited and acclaimed both locally and internationally. He has been part of exhibitions organized by Exposure Detroit in 2010 and 2012 and had work featured in multiple 2010-2011 exhibitions at Studio Couture Detroit. In 2012, Jon received 1st place in the Architecture: Cityscapes category of the International Photography Awards (IPA). In 2015 he was featured in his first solo exhibition organized and curated by the Miami-based L’atelier Ldep Gallery for Two James Spirits in Detroit. More recently, his work was included in the exhibition Detroit After Dark: Photographs from the DIA’s Collection at the Detroit Institute of Arts from 2016-2017.